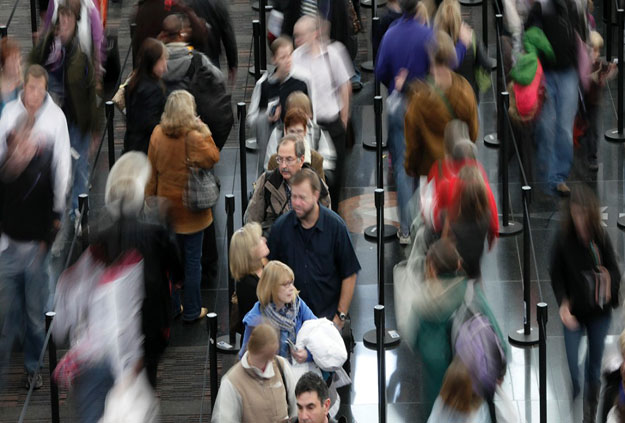 Did you ever meet somebody who knew everything about you from your looks alone? Did you quiver, sweat, or back away? Did the person know you were lying? Did you think that only a psychic could know so much about you?

Body language reveals personality and state of mind. Body communication determines the type and success of social interactions. It reveals important first impressions, attitudes, comfort, truthfulness, and culture. Strangers, friends, law enforcement officials, spies, doctors, and employers regard body language as a significant factor in their assessments of people. Actors and undercover agents study its application for their assumed roles. Some of these signs can be controlled, while others occur reflexively. Today courses train individuals to interpret the body’s signals.

Tonya Reiman, author of The Power of Body Language, describes body communication during new encounters and interpersonal relationships. If two people meet at random, the direction their feet point tells where they want to go. The proximity in which each individual stands reveals the permissible infringement of personal space. When a man and woman interact, a woman feels the violation of space more readily. Reiman refers to the attempt of one speaker’s approach and the other’s retreat as the “intimate zone space dance.”

When individuals converse, their body language expresses the participants’ level of interest. For example, a speaker with crossed arms could indicate lying, an unfavorable impression of the listener, or a desire to discontinue the conversation. The listener’s crossed arms could signify intent to conceal information. For both the listener and the speaker, crossed arms can mean an attempt to remain in control, or simply an effort to keep warm.

Body communication provides an important tool for persuasion. The persuader uses eye contact to convince the audience of his viewpoint. When speaking to a group, focusing on an individual sends encouragement to speak or think. It might also make the listener squeamish and uncomfortable. Listeners tap or yawn to express boredom. Monitoring the audience’s facial expressions communicates important clues to the speaker’s effectiveness and the audience’s mood.

The manner of handshaking indicates personality and attitude. A firm handshake with palms down shows confidence, whereas weak shakes with palms up show anxiety. A brief smile during the handshake means sincerity, while a long held smile indicates gullibility and lack of intelligence. Standing while shaking indicates interest, while sitting signals apathy. Firm, not hard grips with an extended arm and contact with palms communicates sincerity, honesty, and openness in most cases as a general guide only.

Police interrogators look for body signals during questioning. They pay attention to how the subject interacts and reacts. Liars and deceivers display behavior to distance themselves from the questioner. For example, a pen or purse placed between the responder and questioner represents a protective barrier. A stiff posture, an expressionless face, and folded hands convey discomfort. Additional signs of lying or uneasiness include avoiding eye contact, touching the face, biting nails, and motioning hands and arms towards the body. A deceiver’s body movements do not coincide with his voice, speech, or language.

Liars and deceivers avoid answering questions. They respond formally, add insignificant information, and use jumbled sentences. Switching the subject and joking represent attempts to hide responses. However when these attempts coincide with a change in language and the voice’s pitch, it is a sign of prevarication and deception.

Walter Fahey, an expert in body language, lectures and trains police officers in this skill. He stresses two important factors in reading signals. First, both verbal language and eyes must simultaneously express the same emotion. Second, at least three signs are necessary to determine veracity. The successful questioner observes body movements. Liars and deceivers display unconscious and uncontrollable movements. They fidget, scratch, and cannot keep their feet still. If the questioner notices the subject smile, the subject is probably telling the truth. Therefore, body communication provides an extremely important source of information to the questioner, not only for law enforcement officials.

Fahey stresses the necessity to learn cultural mannerisms and expressions. Body movements and behavior communicate different attitudes for each society. Therefore, the questioner must be familiar with the responder’s background. Undercover police and spies must learn cultural habits and gestures in order to blend with cultural or ethnic groups. The speaker’s physical social distance, hand movements, and eye contact are some examples of cultural norms. Male heterosexual friends walking while holding hands, hand movements while speaking, a specific gesture while emphasizing a point, and lack of eye contact may reflect one’s ethnicity or social status. Cops shake hands with downward palms, a sign of power; beggars and persons lacking self-confidence shake with upward palms.

Both the speaker and the listener reveal their character and thoughts through their eye movements. Looking at the forehead means power. Glancing between the eyes and mouth conveys friendliness, whereas gazing downward from the neck shows sexual interest. Eye focus when individuals first meet reveals intention or position. Avoiding eye contact signifies subordination, hiding information, or lying. Staring straight into the eyes indicates challenge or rudeness. According to Fahey, even doctors, police, and other well-intentioned individuals who withhold only a portion of information make one-third less eye contact than honest people.

Psychologist Paul Ekman heads the Paul Ekman Group (PEG). A renowned expert and consultant in understanding body language, emotions, and lying, he teaches practical applications of his skills. His books and extensive writings share his enlightening research on body language and communication. He published Emotions Revealed: Recognizing Faces and Feelings to Improve Communication and Emotional Life (New York: Times Books) in 2007 and Telling Lies: Clues to Deceit in the Marketplace, Politics and Marriage (New York: Times Books) in 2009. Ekman’s work forms the basis for the television show Lie to Me.

Ekman explains that liars and deceivers attempt to control their emotions. However, no matter how hard they try, an involuntary split second squint or wrinkled brow signals a disconnect between the statement and reality. He stresses the importance of synchronism between speech, voice, emotion, and body. Ekman cautions against “Othello’s Error,” the misinterpretation of the reason for deception or prevarication. People conceal information or behave nervously for reasons unrelated to the discussion.

People can control many of their body movements. If repulsed by an encounter, it is possible to purposely stand in a fixed position. If bored at a lecture, sitting on hands restrains fidgeting. These camouflages do not disguise the truth glaring from the eyes and written on the face. The body’s involuntary language communicates the truth.

People judge and are judged by appearance and body language. Body communication relays both conscious and unconscious signals of true thoughts, moods, and emotions. Why do some people become instant friends, while others shy away? Why did the job interview fail? How did airport security know to stop that passenger? How did the doctor know that the patient hid information? The body communicates intentions, emotions, and deceptiveness. Gestures reveal ethnicity, social group, and self-perception. It is not necessary to be a psychic to read people. Learning body language teaches character assessment and reveals true feelings. It enables undercover agents and actors to become another person. No matter how hard we try to mask ourselves, our body communication speaks the truth.

Another key benefit of security officers and airport law enforcement officers being trained to evaluate and read Body Language and identify suspicious behaviours and its applications is to stay away from the pitfalls of racial profiling, which has obvious

applications in relation to counter terrorism. There has been a lot of focus on the dangers of racial profiling in the Western world in recent years, a prime example of that was the false identification of a Saudi national in the aftermath of the Boston bombing on April 15, 2013.