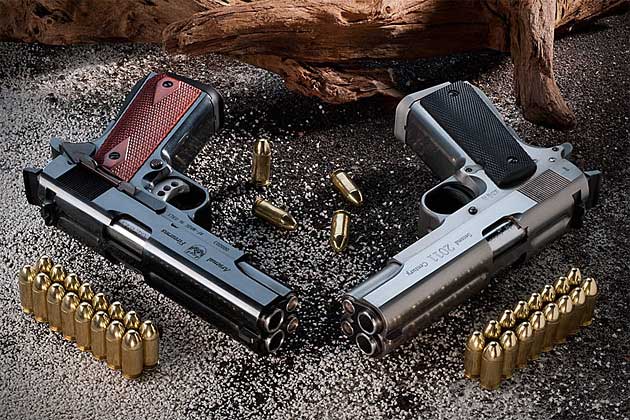 Let’s say, just for the sake of argument, that you are an editor and a writer has submitted the following paragraph as part of a short story or novel:

“Before I got out of my car, I pulled my gun from the glove compartment. It was a .9 mm Luger revolver with a silencer. I checked to make sure that it had bullets and clicked off the safety.”

Now let’s say that as an editor, you read this sentence in a non-fiction article:
“The police also confiscated an automatic SKS assault rifle loaded with cop-killer bullets.“

Reject both submissions. Immediately. With strong words. Why? Because the first example contains seven basic errors involving firearms. The second, while only 14 words long, has three very serious errors. To submit articles with so many mistakes makes the writer not only look ignorant of his or her subject but, worse, unprofessional.

If writers describe firearms, they should have at least a basic grounding in the terminology. Writers don’t have to be expert marksmen, or even particularly like guns, but they at least owe their readers accuracy in their descriptions. If a story or article includes basic, obvious mistakes, the reader will, at best, cringe and lose that flow that writers want their readers to experience. At worst, the reader will lose all confidence in everything else the writer has to say.

The following is a basic – very basic – outline of terms involving firearms. To save space, the word “technically” will not be repeated. Assume three levels of usage: the technically accurate term, common usage and, to be blunt, really boneheaded mistakes. Please don’t be offended if some of the descriptions seem to be written at such a basic level; they assume absolutely no knowledge of firearms, except what the reader has seen in movies and on television (most of which is wrong).

“Guns.” This is used to describe cannons, artillery, as in “The Light Brigade rode up to the mouths of the Russian guns.” Yes, there are shotguns, air guns and BB guns and even a magazine, Guns & Ammo, written by and for “gun nuts” (who, by the way, take perverse pride in that term). If it involves gunpowder and a human being can carry it, it’s a “firearm.” If it has a short barrel (by legal definition, under 14 inches), it’s a handgun. Longer, it’s a rifle. If it has a smooth, unrifled barrel, it’s a shotgun.

Handguns (also “pistols” and, in military and police usage, “side-arms”) come in two basic flavors: revolvers and semi-automatics. There are a few exceptions, but don’t worry about that right now. A revolver has a series of chambers (where the ammunition is inserted) arranged in a wheel. As a round is fired, the wheel turns to the next position so the next round can be fired. A semi-auto (or auto-loading) pistol has a magazine (“clip”), which is usually inserted into the grip (the “handle” part that the shooter holds). On top is a slide, which goes back and forth as the pistol is fired, ejecting the casing (“shell” or “brass”) and loading the next round into the chamber.

The following is very, very important: There is no such thing as an “assault rifle.” The term “assault” describes a combat tactic, not a type of firearm. Any firearm can be used in an assault. For that matter, anything can be used in an assault, including a knife, helmet, stick or entrenching tool. The term “assault rifle” is deliberately provocative and politically inspired. In an opinion piece, use of the term will show the writer’s bias, which is fine. That is what opinion pieces are for. In what is supposed to be an objective article, use of the term shows either bias or ignorance. Neither should be acceptable.

Automatic, semi-automatic and “auto.” An “automatic” firearm will continue to fire rounds as long as the trigger is held down and as long as the ammunition lasts. A semi-automatic will only fire one round when the trigger is pulled. The shooter has to let up on the trigger and depress it again before another round can be fired. The term “auto” is short-hand for “auto-loading” as in “a Colt .45 auto.” This should not be confused with “fully automatic.” Other types of firearms, such as lever-action, bolt-action, and single-shot, are self – explanatory.

Sometimes writers use the term “machine gun” to describe all fully-automatic firearms. A machine gun usually (not always) uses a belt of ammunition and is not usually carried by an individual.

This brings up another area of confusion. Sometimes, a firearm is described as an “M-16” or an “AK-47” when, in fact, it is not. There is a semi-automatic rifle designated the AR-15, which looks very much like an M-16, and there is something called an SKS, which looks like an AK-47, but, isn’t. An AR-15 and an SKS are semi-automatic only and can be legally owned in most states. By the same token, if someone reports that an automatic AR-15 or SKS was found in a drug dealer’s home, somebody has some explaining to do.

“Bullet.” Ammunition is composed of four basic parts: The bullet (“projectile,” which is the piece that actually is fired out of the barrel), the case (the brass part), the powder (that makes it all go) and the primer (a small cap inserted into the base of the case). The primer makes a small explosion when hit by the firing pin, which sets off the powder. So, a cartridge (“round”) is the whole package before it is fired. A cartridge is not a “bullet.”

Caliber. Rifle and pistol calibers are given either in inch diameters, described in decimal notation, or in millimeters. There is a .40 caliber (0.40 inches in diameter) and there is a 9mm round. There is no such thing as a 40 caliber (which would be over three feet wide) or a .9mm (which would be about the thickness of a needle). Also, note that there is no space between the “9” and the “mm.” Shotguns use gauges. This system uses a whole number; the larger the number, the smaller the diameter of the barrel. So, there can be a 12-gauge shotgun (pretty standard) and a 20-gauge (smaller bore, usually used for hunting birds and small game). The .20-gauge shotgun, on the other hand, does not exist. To confuse things a little, there is a .410 shotgun (a small-bore used mainly for small birds, like quail), but that designation is in the decimal-inch category, not the gauge measurement.

Safety. Many firearms, particularly semi-automatic rifles and pistols, have a small switch on the left side of the receiver (the part where the cartridges are loaded). Usually marked “S” for safe and “F” for fire, they keep accidental discharges (firing by accident) down to a minimum when they are used correctly. Shotguns, bolt-action rifles, and single-action rifles have safeties, but in other places. The Glock semi-automatic pistol has a safety built into the trigger and the 1911A1 semi-automatic pistol (you’ve almost certainly seen one in a World War II movie) has a grip safety; the shooter has to hold the pistol in a firm grip in order to fire. However – another common misunderstanding – revolvers do not have safeties. (Actually, there is one, but it was made for Navy SEALs and is designed to be used underwater.)

“Silencers.” No such beast. There are “suppressors,” but no silencers. And generally they cannot be used on revolvers. Here’s why: The noise from a firearm comes from two sources. The gunpowder firing off (it’s actually a controlled explosion) is loud. Also, most rifle and pistol ammunition has a muzzle velocity (the speed of the bullet when it first comes out of the firearm) greater than the speed of sound (1,100 feet per second, more or less). This means that the bullet breaks the sound barrier, making a distinctive “crack” sound. Suppressors use baffles, like an auto muffler, to trap the sound of the powder going off, but they are not 100% effective in trapping all the sound. Since a revolver’s wheel has to be able to turn in order to function, there is a gap between the chamber and the base of the barrel. It’s a small space, but it’s there; if you watch a revolver being fired in low light, you’ll see a powder flash coming sideways out from the pistol. This means that a “silencer” on the end of the barrel makes no sense; the sound is already escaping from the chamber-barrel gap. In a semi-automatic pistol, on the other hand, the round is being fired in an enclosed space (trapped by the slide on top of the pistol), so the only sound from the powder explosion comes out of the muzzle, which can be trapped by the suppressor to a very great degree. Also, the ammunition used has to be sub-sonic (slower than the speed of sound) to avoid that part of the sound equation. However there have been some custom modifications to suppress certain models of revolvers.

There is a great deal more detail about firearms that could be covered: The difference between a .45 ACP and .45 Colt, what “magnum” means, the political bias inherent in the term “cop-killer bullet,” which firearms are chambered for which calibers (and why there is no such thing as a Luger revolver), single-action versus double-action and many other areas. If you want to learn more in order to write about firearms in an accurate manner, there are several general-level books that can be read. A quick search of the Internet or a trip to a public library (reference librarians are a great resource for writers) will also help get you started.

Perhaps the best way to learn more about firearms, though, is to visit a gun shop. If the person behind the counter isn’t busy and if you show a sincere desire to learn more about firearms, he or she (lots of women involved in the shooting sports) will almost certainly be delighted to take the time to teach you. People, who enjoy shooting, and particularly gun shop owners, are always anxious to teach others, particularly in order to dispel myths and understandings. Pick up a firearm and learn the various parts. Ask questions (there are no “stupid” ones), watch someone fire a few rounds at the shooting range, maybe even take a turn yourself. Who knows…? Even if you don’t take up shooting as a hobby, you will at least become more accurate in your writing. Which, after all is the mark of a true professional.